Chile was the country that was under my right index finger when Karma threw me an inflatable world globe. It’s as good a method as any to choose the first country in our virtual tour around the world.

My experience of Chile

Absolutely no real experience at all. I do have a Chilean stamp in my passport from 2001. My big bro and I went on a cruise to Antarctica, which departed from Tierra del Fuego, and we had a day in Ushuaia on the way home. We decided to do a day tour of Tierra del Fuego and part of that was to visit a Chilean outpost. I don’t think that counts as really visiting Chile, though.

Chile sounds amazing. I didn’t know that it had the driest desert in the world (the Atacama Desert). Or that it has the oldest mummies in the world. Or that it is the world’s fifth largest exporter of wine.  Or that evidence of potato consumption goes back 14,000 years. Master Eight was very pleased to learn that soccer is the most popular sport, and Miss Four was happy to learn that the Chilean flag has the same colours as the Australian flag (which are not all that unique as far as flag colours go, but hey-ho).

The next step is to research what food we will cook and eat for our lunch on Sunday 29 January. Pisco sour will definitely be on the menu.

I had been told by a work colleague (hello, Martin) that Pisco Sour is one of the best drinks on the planet, so we did a trial run yesterday. Oh my goodness. Martin has not set us wrong! The first mouthful made my face screw up (which, in all honesty, could be considered an improvement), but it was soooo refreshing. Especially on a hot summer evening. Who’d have thought that some pisco, lemon juice, sugar and ice could be so delicious?

Ingredients were not that hard to source. We got pisco from Uncle Dan’s (aka Dan Murphy). Hasa marina caused me some angst, but a visit to USA Foods in Moorabbin kind of fixed that – will harina de maiz be OK for the empanadas? Let’s hope so. Chicharrones also caused some angst until a chance visit to a local Chinese grocer  found fried pork rinds.

Cooking will begin in earnest on Saturday.

And table decorations. Master Eight and Miss Four have made Chile flag picks, and I have designed place mats. Now to finish off the factsheet for the quiz, with the disclaimer that I am only going to pull facts off the internet as I find them – I am not going to verify any of them. Especially the quirky ones.

A closer inspection of the pisco label reveals that it is 40.5% proof. Holy moly. No wonder we loved it!

And now I’m off to prepare another Pisco Sour.

With thanks to the good folk at All recipes for their inspiration, we are going to sample the following at our Chilean lunch on Sunday:

Here are the recipes for our faves – Chile-best recipes

What a great choice Chile was for our first international lunch! The table looked incredible, and we hopped into the food with great gusto.

I was able to do a fair bit of preparation on Saturday afternoon, which left us with the easier recipes to finish off on Sunday morning. Elysia did a great job at alternately constructing the Torta De Hojas and photographing the food – all the photos on this page are thanks to her!

Lauren and I liked the Avocado Shrimp Ceviche best, but the Chapaleles were a hit as well. And how can Chapaleles not be a hit – pan-fried mashed potato with blitzed pork crackling is always going to be a winner. The pork emapandas were also great, and definitely worth cooking another time, but the Leche Asada was a little too eggy for our palates. The pisco sours were as good as they were last week, except that I’m sure they were even stronger!

Lauren and Will called into Dan Murphy‘s on the way and bought some Chilean wine, which we can highly recommend.

Our factsheet is attached below. Will was the quizmaster and, true to form, devised some fairly obscure questions. Questions like “Which world leader would be most welcome in Chile?” You have to study the factsheet and think outside the box to get the answer to that one.

Check out the photos below. Thanks Elysia for taking them!

Chile will indeed be a very hard act to follow, but it’s time to say adios to Chile and ssalamū ‘lekum to Morocco. 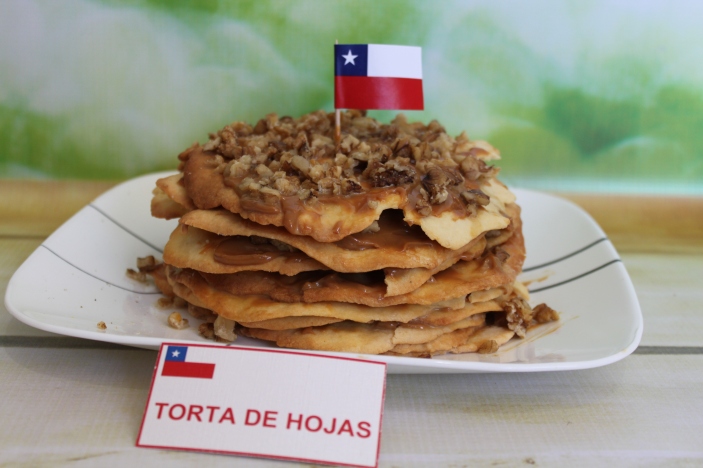 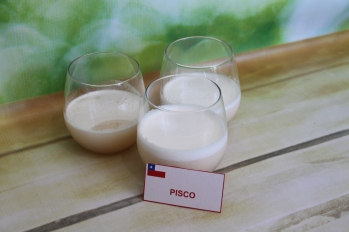