My experience of Colombia

I have never been to Colombia, and have no real desire to go there. But I was interested to learn that I had been pronouncing it incorrectly forever. It’s ColOmbia – pronouncing the “O” is very important. ColUmbia is a state of the USA, not the country in Latin America.

The preparation was fairly easy. I have made a decision to not try to hunt down difficult-to-get foods any longer and will substitute with locally available foods if I can. My fridge and pantry are becoming clogged with packets and jars of food that I needed only one tablespoon of. Therefore I didn’t try to track down foods such as sazon goya with azafran or masarepa or plantain chips – life suddenly became so much easier!

Powdered beef was a new experience, and I really need to get myself to a Latin American eatery and try proper tamales. I followed the recipe and steamed them, albeit in bamboo leaves rather than banana leaves, but the dough was awful. Maybe I didn’t roll it thinly enough. After trying one that had been steamed, I fried the rest. It turned out to be a good decision.

Here are the recipes for our faves – Colombia best recipes

Our Colombian food was lovely. The only problem was that it was a fairly hot day and we probably didn’t have the appetites that we might normally have had. I loved the cheesy potato croquettes, but the pork tamales (fried, not steamed!) and the pandebono were very popular. I didn’t think the pandebono would work out very well – there was an awful lot of cheese and not much flour, but it was very nice. The seafood stew was yummy, even without the clams that the recipe asked for.

While researching Colombian food, just about every web site raved about the paisa platter. Maybe a paisa platter should be served as the only star of the show, but it just seemed to be lots of little dishes served together, and none of them particularly stunning. The green chicken with rice was also very nice, even if it did have peas in it. Thanks Rob and Karma for making it – it was quite delicious, even with the peas.

The desserts were a little disappointing, in my view. The Christmas custard was a weird texture. It looked like fudge and tasted OK but was just a custard made with lots of cornflour. And I thought the dulce de leche flan would be amazing, with dulce de leche and sweetened condensed milk how could it go wrong? It didn’t taste fabulous and, again, the texture was not very nice. Maybe it was the ten eggs (that’s a lot of eggs!). But I did love the toffee effect on the top. I’ll definitely apply that to other desserts – it was fabulous and oh so simple.

The cocktail was a Bogota Cosmopolitan, which was dark rum, lime juice and syrup. Very nice, it was.

Jan got right into the mood of Colombia and brought a huge bottle of Coke – of the liquid kind, not the powdered kind.

The weather was fairly warm, with a prediction of 30° so we ate outside. Poor Cooper, with his leg still shaved and badly limping was locked in the shower.

I suspect the warm weather stopped us from eating as much as we usually do, but it was very pleasant sitting out there slowly grazing our way through the food.

Elysia wrote the quiz. Thank you, Elysia, it was a very good quiz! Except that Will won. Again. Well done, Will.

And here’s the quiz – Quiz_Colombia

The highlight of lunch in Colombia

The pandebono (cheese bread) and the tamales were voted as the dish of the day, although it would be the croquettes for me.

We’re off to the Philippines on Sunday 22 March. I don’t know anything about Filipino food, so this should be fun. Karma is going to write the quiz. 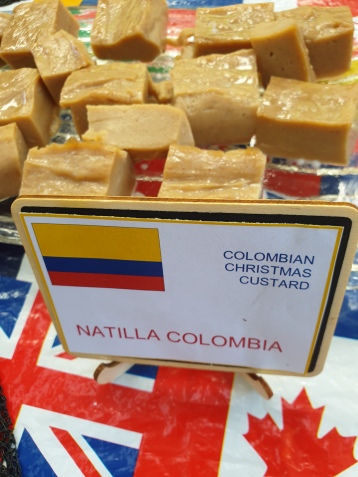 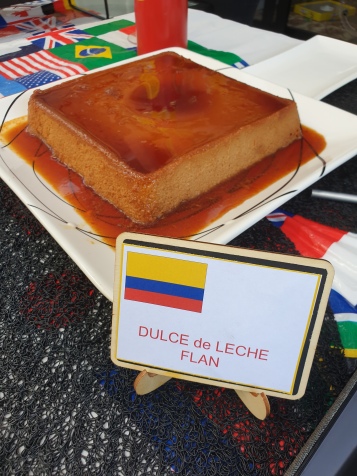